The Nobel Prize in chemistry 1977 Ilya Prigogine:
A biological system can be ordered inside only if surrounded by a large flow of energy that passes through, without stopping. A biological system needs to exchange large amounts of energy. This mechanism is capable of giving itself a disorder whilst producing internal organisational car shape. A possible BOTTLENECK of energy that lets the system ABSORBS energy without MISTAKE IT with the external environment destroying DISSIPATIVITA ', also destroys the internal coherence of the system. Coherence of the system means that all its components VIBRATE in unison that is they all have the same vibrational frequency. So any product or system that would lead to a screening would be detrimental to health as we would get the Faraday cage effect.
The physicist Ernest Froelich: our body is a great energy and at the same time a large shock absorber. Our body is a "set" of cells that needs continuous exchange with the different energies of the environment; each one of these cells to function has been equipped with a magnetic field:

– Negative inside with energy absorption function.
– Positive outside with the function of energy dissipation. 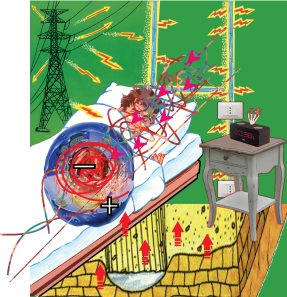 The cell gets sick and then the body becomes sick when you create a block of energy, i.e. doesn't come out all the energy consumption due to:
– Specific enzymatic reactions
– Technical or natural radiation surrounding energy attack (from the underground).

Froelich, Professor of theoretical physics at the University of Liverpool, he was the first physicist who in 1968 claimed that coherence in biology is one of the most important qualities for understanding information sharing among living beings. He built a theoretical model regarding the coherent vibration of biological systems, whose developments are extremely important. The model of Froelich provides consistent vibrations, provided that the system is able to dissipate all the energy received. This is more or less like this: a giant biomolecule (DNA) receives external energy (food, respiration, ATP), and being with the excitement of a certain vibration frequency. DNA rigidity that prevented or hampered the vibration, would block the internal control functions of the organism. So-called substances “strong intercalating”have antibiotic activity (kill), as this will block the vibrational activity (like a peg in a scale). Substances “weak intercalating”that hinder but do not block the vibrational activities, are carcinogenic.
This is in perfect accord with the hypothesis of cancer psychosomatic L.O. Speciani, which has statistically proven that cancer is nothing if not the normal cell growth in the absence of control and regulation by the Agency. That control that would remove regulatory activity being impeded because of consistent vibrations DNA intercalating substances.
The theory of oncogenes, although strictly allopathic derivation, finds its explanation in the light of the circumstances. In fact it is known that the active DNA actually only of genes it possesses.
A change in the frequencies of vibration of molecule has the effect (damaging) to activate normally dormant genetic fractions, which generate abnormal growth and wild (compared to “project”) we call cancer. The man follows a project (possibly influenced by external variables), which develops a system ordered and not chaotic, leading to the grown man, rather than an undifferentiated mass of meat or molecules. The food we eat is not the consumption of “order” We have to play in order to maintain this State.
Ilya Prigogine, Nobel Prize in chemistry 1977, has identified the characteristic of living matter, to be a dissipative structure. The dissipative structures are open systems that maintain their State of balance thanks to a continuous dissipation of energy outward.
The order produced by this dissipation, it generates new order and new organization, but if the energy flow stops or decreases, the structure may collapse, and not return to its initial state (irreversibility). This energy consumption is for internal control of the vital processes, maintaining the individual into a State of order. The regulation of life processes is due to vibrations “consistent” micro dissipative structures inside the body. Especially water and organic macromolecules. This intense game of coherent vibration which is a command and control network immanent to living matter.